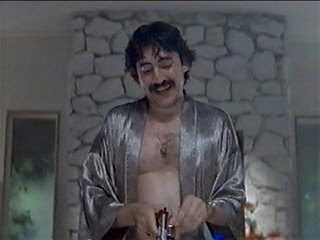 Ticket to ride, white-line highway
Tell all your friends, they can go my way
Pay your toll, sell your soul
Pound-for-pound costs more than gold
The longer you stay, the more you pay
My white lines go a long way
Either up your nose or through your vein
With nothin to gain except killin’ your brain

Grandmaster Flash’s cautionary advice is once again de trop in Hollywood on the evidence of this story, in which Paramount is refusing to go forward with a movie franchise helmed by two directors with a modicum of commercial success—Steven Spielberg and Peter Jackson—and based on a series of books about a globetrotting young journalist-adventurer (and his cute dog) that’s gargantuan around the world—the Adventures of Tintin. Now, Tintin’s not all that big in the U.S., but I assure you, every freaking kid in Europe has read all twenty-four of the Tintin books, at least six times each.

How big are these books? Charles de Gaulle once remarked to André Malraux, “Au fond, vous savez, mon seul rival international c’est Tintin!” (“At bottom, you know, my only international rival is Tintin.”) And the Dalai Lama bestowed an award on a Tintin title which explored the culture of Tibet. And, perhaps a tad more prosaically, two hundred million Tintin books have been sold.

I don’t know how much coke Paramount is doing to make them think this is a bad idea, but it’s catastrophically bad. If this gets made under the current direction, Spielberg & Jackson’s involvement will sell the movie domestically, and internationally, it’s a guaranteed blockbuster even if it’s just adequate.