↓
Home→Uncategorized→How Media Are Trying to Tank the Economy

The stock market closed around 26,500 last Friday afternoon, although at 9:30 that morning, it was at 26,160. That’s a 1% difference. Interestingly, it was at 26,500 on Thursday afternoon, so even if you were one of the very few affected by little drop, you made your money back.

Plummet! Yes, like if gas goes down three cents a gallon, we can say its price plummeted.

Or if Joe Biden’s polling numbers go from 39% to 38%, we can say his support has plummeted.

Or if CNN’s ratings drop another 1%, we can say viewership has plummeted. 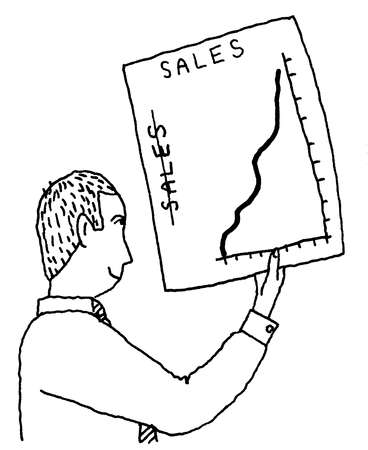 A 90-degree turn to the left is all it takes!

The Czar would love to link that headline for you, but CNN already revised it to Global Stocks Drop After Trump Risks ‘Full-On’ Trade War with China. You might click on that link later and see if it’s been changed again.

So why the hyperbole? Why would CNN portray an hours-long dip in the Dow as a plummet, which implies a disastrous free-fall?

Probably because the economic news is really good, and Democrats can’t win a presidency unless the economy is rocky. So by using scare words, you create the perception among Americans that, hey, maybe things aren’t so good right now. This way, you can create enough fear, uncertainty, and doubt to encourage Americans to hold off on buying the house, that car, or that new washer/dryer combo with the wireless smart-app feature that texts you when your laundry is done. And, just maybe, you get enough Americans to hold off that you can trigger a slowdown.

Any slowdown is a recession to the news media, regardless of how many quarters of non-growth you see. RECESSION LOOMS, the drumbeat goes, on so many media stories today.

Recessions get Democrats elected, even if they have to cause them themselves.

Consider this headline: Dow Briefly Dips 1% Before Regaining. Know which media outlet carried that one? None of them.

Here’s another thought for you. Summarizing the CNN story, we learn that President Trump threatened new tariffs on Chinese goods. We learned that three global markets saw their indices drop by single-digit percentages, but the Dow and oil futures made up what they lost.

We also learned the Chinese were annoyed, and that a real trade-war between the US and China would cause a reaction. No kidding. But after a week of record-breaking highs, Friday morning’s dip was the biggest dip in weeks, just before recovering.

That doesn’t sound so bad. But you know what the article doesn’t explain? How exactly does Trump’s threat correlate to this small, momentary dip in the global markets? Sure, they happened at the same time, but you know what else happened Friday morning?

Lots of stuff. There’s no direct link—presented in the article—between the Trump statement and the plunge. Could there be? Absolutely, and almost certainly there was some effect; but if so, it was minor.

Here’s a bit of advice: whenever any news outlet “explains” why stocks drop or rise, check to see if most other financial sources generally agree. They won’t. If you Google Friday’s drop, you’ll see that many diverse sources cite the Trump threat as the cause, specifically using the word “plummet,” indicating they’re all using the same source and not doing independent research.

And this requires no explanation: few financial folks will ever cite a specific cause for why the market does anything. Phrases like “on fears of,” “as a result of,” or “in expectation of” are bullshit explanations to pad out the story. The only real story is that prices are trending up or trending down (bulls and bears), and finding a specific explanation for day-to-day shifts are imaginary. It’s like blaming colder temperatures tomorrow on magazine sales or on a sea cruise cancellation.

The political origin of this style of reporting is obvious, as well. If the economy keeps booming every couple of weeks, Republicans are going to coast into an easy victory in 2020. Since this outcome is unacceptable, you will see two counter-strategies employed by Democrats: the first is RECESSION LOOMS, in hopes that consumer confidence is shaken enough to cause a real one, and the second is all sorts of twisting and gyrations to convince voters that the Democrats are actually responsible for the good times.

We’re already seeing a bit of the latter: but because Democrats promised America that Trump’s economic policies would wreak utter devastation on the land, there’s precious little to cite as proof. As a result, we have already seen the claim that the powerhouse economy was the result of President Obama, not Trump. Except, as you know, Obama isn’t running in 2020; this has less effect.

What if President Obama were president today?

As President Trump’s second term grows increasingly likely by the day, expect to see more RECESSION LOOMS headlines. Who knows? Maybe the Democrats will be lucky enough to genuinely cause one. They certainly have willing helpers in the media.